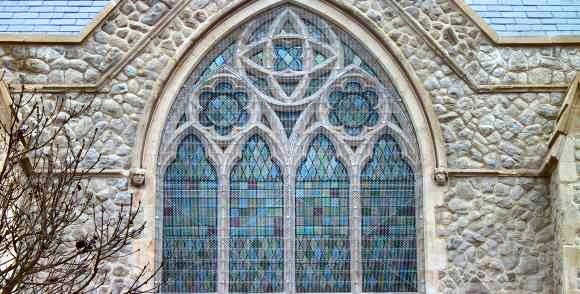 AIANO manufactures a wide range of wire mesh products for a number of different purposes. We have been manufacturing guards from our East London workshop since 1860.

Sometimes it is good to recall projects we have done in the past. In the coming months, AIANO will post an occasional series of articles under the theme, AIANO jewels, about some of our flagship projects over recent years, projects that we considerable remarkable in some way, and of which we are particularly proud. These iconic photographs of AIANO hand-crafted woven-mesh window guards were taken at Highgate Road Chapel, and have attracted much attention over the years. 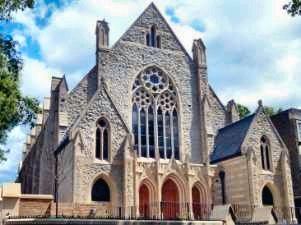 Highgate Road Chapel was founded as an independent Baptist Church in 1877 by businessman James Coxeter, a manufacturer of surgical instruments. The church is located between Highgate and Kentish Town in north London.

In the late nineteenth century, the whole area underwent transformation when areas of Hampstead Heath were redeveloped in connection with the expansion of the railway in north London, as a result of which, large numbers of people moved into the area. The church was non-conformist and evangelical. They had a rule of ‘dos and don’ts’, including no drinking, smoking, working on a Sunday, no sex before marriage, or fraternising with unbelievers other than to convert them, no dancing, theatre or picture-going.

Decline and redevelopment of the Chapel

The First World War brought significant disruption to life at the Chapel, and from that time the size of the congregation began to contract. This decline into the new millennium, until by 2000 the church was in poor condition, with few members and buildings so dilapidated as to be almost unusable. In 2001, the church decided to sell part of the site, and raise funds to rebuild the old Sunday School Hall as a new chapel, and this building opened in April 2008.
London Conservation areas 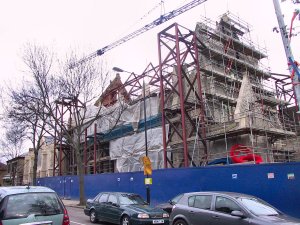 Fitzrovia Construction Ltd. won the project to redevelop the site. Because of special status of the building and the area, the interior structure of the building was completely demolished, but the external faced was retained and restored. The building was extensively underpinned, piled and a complex steel structure inserted within the existing external walls. Fourteen apartments were constructed within the retained features of the church.

AIANO was invited by Fitzrovia Construction to provide woven-mesh window guards to protect the beautiful stained glass and leaded light windows in the chapel.

The AIANO hand-crafted woven-mesh window guards at Highgate Road Chapel are remarkable, and have been much admired over the years. In this, the guards function in a way that is contrary to the principles of modern-day window guarding for churches and historic buildings, as currently practiced. AIANO generally seeks to make the woven-mesh window guards as unobtrusive and unremarked as possible. Their function is to protect the beautiful stained glass and not to draw attention to themselves. The reason they are so noticeable in this case is because of the specification required by Fitzrovia Construction and the project architect.

The scale of the window guards

The woven-mesh window guards stand out because of the scale of the windows. The large guard covering the main window was made in 3 sections and covers an area of approximately 60sq ft, (5.5m2). As noted the guard was made in three sections, and each section follows the contours of the stone two large gothic arches. 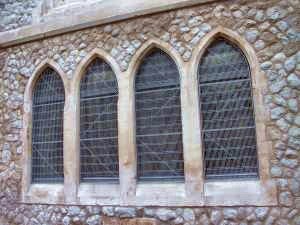 Another reason the guards stand out is because they are a relatively unusual, for these days, example of window guards that have been hot-dip galvanised.

In the past, before the invention of stainless steel, window guards were made from mild steel mesh and then hot dip galvanised. In its day, galvanised window guards were themselves something of a revolution, because a guard could be protected from corrosion for fifteen years or more. However, these days AIANO is almost never asked for galvanised guards, and a clear majority of churches and architects prefer stainless steel guards, which retain their integrity and look better for much longer.

The hot dip galvanising process is a highly invasive process in which the wire mesh guards are dipped into a tank of molten zinc. As a result, the guards need extra supporting bars, known as ‘stays’, to help the guard retain its shape. The galvanised window guards at Highgate Road Chapel are distinctive because of the diagonal and cross-section stays that can be clearly seen.

A third reason why the guards stand out is because they have not been powder coated after manufacture. Most wire mesh window guards for churches and historic buildings now are powder coated black after manufacture. The black colour absorbs the lights and enables the guard, when well-made and expertly fitted, to be almost invisible. In this case, the silvery finish of the newly galvanised guards reflects the light, making them stand out more clearly.

Galvanised guards do however dull down quite quickly to a matte grey colour, and these too somehow blend in with the colours of the stone at Highgate Road Chapel.

Above all, the AIANO hand-crafted woven-mesh window guards at Highgate Road Chapel stand out because of the skill and craftsmanship of AIANO wireworkers.

First, we take accurate measurements and templates to ensure that the guards are made to the exact size and fit of the windows. Next, our wireworkers are highly skilled craftsmen who make the mesh using time-honoured traditional methods of weaving and fabricated the guards. The wires are turned over the frame using methods that have changed very little in the last 150 years. Finally, our AIANO craftsmen fit the woven-mesh window guards with precision and care for the precious stonework.

Aiano & Sons Ltd., the leading maker of wire mesh window guards for churches and heritage buildings has been making window guards using traditional methods handed down from generation to generation of wireworkers since 1860.

Making quality window guards to protect church windows is not only about quality wireworking. Each church building has its own requirements and special features, and AIANO starts each job with a site survey to take templates and ascertain the exact needs and constraints of the job. This process requires accuracy and experience to ensure that the finished window guards fit perfectly into the space allowed for each window. Aiano is especially skilled at making the complex shapes and lines of individual traceries.

If you have special requirements, do not hesitate to contact us for a quotation. We can make guards to all sizes and requirements. Please call Scott or Gokay on 020 7987 1184 or email us if you would like to discuss your requirements, or for further information or advice on AIANO guards.