AIANO window guards for the Old School in Rotherhithe 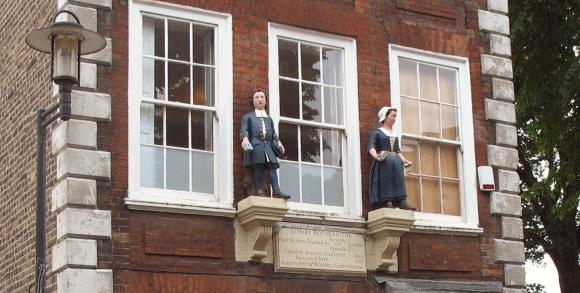 St Mary Rotherhithe School is a Grade II listed building. The school was founded by Peter Hills and Robert Bell in 1613 to educate the sons of seafarers. It was instituted as a charity school in 1742 and, according to the plaque on the front of the building, moved to the present building in 1797. The Old School, as it is known, is a local landmark and distinctive not least for the two figures of schoolchildren that still decorate the façade. 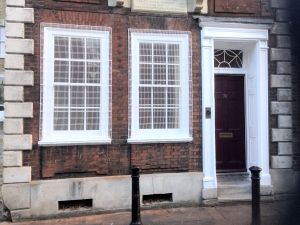 The building is now home to Rose, a leading British design studio with more than 100 international creative awards to its name. Rose won a silver award for the Most Awarded Design Agency 2014 at the world-renowned D&AD Awards. Rose is also ranked in the top 20 creative branding agencies in the world. 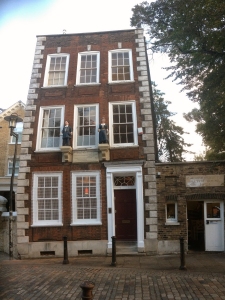 The requirements for the project were strict because of the age and significance of the building. AIANO made an initial visit to the Old School to carry out a site survey. We took measurements and photographs of the windows, assessed the condition of the brickwork and the different options for window guard design and installation.

It was decided early on that the window guards must be designed to fit over the brickwork and be secured to the brick, rather than inside the window reveal. But there now followed an interval while the customer liaised with the council and agreed the final design and implementation. AIANO adjusted our quotation to meet aesthetic and technical requirements of the building. For example, the type of fixings to be used had to be agreed. For such an old building even the number of fixings needed to be considered and a balance found between ensuring the guards were secure and not drilling into the fabric more than was strictly necessary.

The best of both worlds

Once these details had been finalised, AIANO manufactured the window guards. First our skilled wire workers wove the mesh, using methods hardly changed from those first employed by Charles Aiano and his sons back in the late nineteenth century.

The principle difference is that AIANO wire workers today use stainless steel rather than copper or mild steel wire. This takes the best from both worlds. On the one hand, the traditional woven mesh is stronger and more durable than modern day pre-fabricated weld mesh, as well as being more in harmony with the aesthetics of old buildings because of its hand-crafted appearance.

The aptly named, stainless steel is still an alloy of Iron, but with a minimum of 10.5% Chromium. The chromium produces a thin layer of oxide on the surface of the steel which prevents any further corrosion of the surface. Increasing the amount of Chromium gives an increased resistance to corrosion. Stainless steel also contains varying amounts of Carbon, Silicon and Manganese. Other elements such as Nickel and Molybdenum may be added to impart other useful properties such as enhanced formability and increased corrosion resistance. 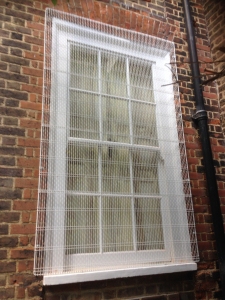 AIANO used p-clips positioned behind the window guards to allow for a less obtrusive fixing.

AIANO engineers returned to the Old School to install the new window guards. The guards were installed using special stainless steel p-clips, fabricated in-house, and stainless steel screws. The clips were positioned behind the window guards in order to make the fixings both stronger and more unobtrusive. The whole installation was a delicate process because of the fragile and unpredictable condition of the brickwork.

AIANO have been hand crafting high-quality, custom-made, window guards to protect the precious windows of churches and other historic buildings for more than 150 years.

AIANO have unparalleled experience in all aspects and methods of making window guards, whether they be made from weld mesh or traditional woven mesh.

Churches and historic buildings have widely varying window designs and shapes and our window guards are custom made for each individual window. We produce separate guards for each window light and tracery, as recommended by English Heritage.

To our knowledge, AIANO are the only company in England still making individually crafted hand-woven wire window guards for churches. When we fit the guards ourselves, we use our own method of invisible fixings that cannot be seen except on close examination. We use only non-ferrous fixings to ensure that beautiful stonework will not become marred and discoloured in future years.

If you have special requirements, do not hesitate to contact us for a quotation. We can make guards to all sizes and requirements. Please call Scott or Elliott on 020 7987 1184 or email us if you would like to discuss your requirements, or for further information or advice on AIANO guards.