The importance of the Made in Britain campaign

AIANO manufactures all its wire guards in its East London workshop

At a time when Britain’s steel industry is declining, it is now more important than ever to support local suppliers and use British materials. In the last year alone over 5,000 jobs have been lost in the steel industry. One of the main reasons for these job losses is that Chinese steel manufacturers are flooding the market with under-priced steel in order to remove potential competition and gain a monopoly on the UK market. It is therefore vital to support UK manufacturing, as without it, the economic recovery the UK has shown over the last few years could stagnate and go back into recession. The UK’s over-reliance on the financial sector was a key factor in the previous recession, so we need to ensure this does not happen again.

At AIANO we pride ourselves in sourcing materials locally in the manufacture of our guards. We are so passionate about supporting fellow UK manufacturers that we have signed up to the ‘Made in Britain campaign’.  The Made in Britain campaign is a not-for-profit organisation which allows brands to take ownership of the ‘Made in Britain’ marque and display their ‘Britishness’. A poll by ‘Which?’ showed that 84% of people polled would like to see a marque when they purchase a product so they can see if a product has been manufactured in the UK or not. With so much of our industry now being relocated to foreign countries to cut costs, it is currently difficult for consumers to differentiate between a British made product and a product made abroad. British staples like Paul Smith, MG Motor and HP Sauce have now moved their production and the jobs that come with it abroad in an effort to boost profits. As a result, AIANO has adopted the ‘Made in Britain’ marque to demonstrate our support for the British Industry.

AIANO, 156 years of making it British 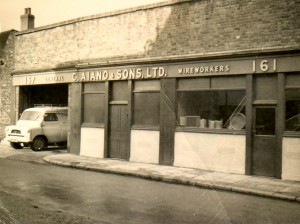 AIANO has been manufacturing wire mesh guards from its East London workshop since its formation in 1860. It has remained in the area ever since, even surviving bomb damage during World War II, and moving to its current address in Poplar in the 1960s. Originally much of AIANO’s trade came from servicing the ships which came into the Port of London, along with building bird cages which were increasingly popular during the Victorian era. Over the years the business has evolved into one of the leading authorities on heater guards for health and safety applications. AIANO’s radiator guards are used in Schools, Nurseries and Hospitals throughout the country. As well as this, we are one of the few companies in the UK with the expertise to manufacture woven mesh window guards. The methods used are the same techniques used throughout our more than 150 year history. Our guards have recently been installed in the World famous Highgate cemetery in North London.

Our senior design engineers have a combined experience of more than 70 years in the wireworking industry, with knowledge passed down from generation to generation of welders. As such, we have the experience and know how to design guards to suit most purposes. Much of our business now comes from bespoke projects, such as our recent project to manufacture stainless steel pipe guards for the Offshore oil Industry.

AIANO is an industry expert and authority, and very often AIANO is recommended in bid documents, in specifications and requirements by architects, construction companies or users because of our reputation for high quality, reliability, credibility and fast delivery.  Usually we develop new designs and establish new trends and other companies follow. Please call Scott or Elliott on 020 7987 1184 or email us if you would like to discuss your requirements, or for further information or advice on AIANO heater guards.