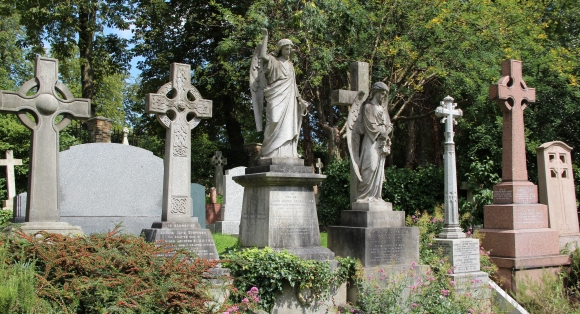 Highgate cemetery is a celebrated and much loved cemetery in North London, known for its romantic profusion of ivy-entwined trees and Victorian monuments; among which feature surely one of the greatest collections of stone angels in the country. AIANO was invited to make and install woven mesh stainless steel window guards at two of the mausolea at Highgate Cemetery, the Strathcona mausoleum and the Pocklington mausoleum.

The east cemetery is the last resting place of George Elliot, and many diverse figures including The Hitchhiker’s Guide to the Galaxy author, Douglas Adams, pop artist Patrick Caulfield, concert pianist Shura Cherkassky, social historian Eric Hobsbawn, and, last but by no means least, political thinker and revolutionary, Karl Marx.

Highgate Cemetery opened in 1839 and was a private cemetery. But it could not continue to be run on a profit-making basis. In 1975 the Friends of Highgate Cemetery were formed and rescued the cemetery from the neglected and overgrown state it had reached in the 70s and 80s. 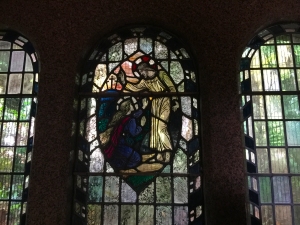 AIANO was initially asked to provide new window guards for the Strathcona Mausoleum. The Strathcona mausoleum is directly inside the entrance to the east cemetery, and indeed the Friends of Highgate Cemetery have plans to make the mausoleum freely accessible to enable visitors to gain a flavour of the cemetery before deciding whether to pay the entrance fee that is so essential to the upkeep of the cemetery.

The mausoleum was built in 1914 after the death of Donald Alexander Smith (1820-1914) who was the first Lord Strathcona and Mount Royal. Lord Strathcona was born in Scotland but emigrated to Canada where he became an MP, a governor of the Hudson’s Bay Company and director of the Canadian Pacific Railway. He was also instrumental in founding the Royal Canadian Mounted Police and, from 1890, he was High Commissioner for Canada in London. He is interred together with his wife Isabella Sophia and daughter Margaret.

AIANO was asked to make hand woven mesh window guards to protect the three round-headed windows in the mausoleum. The windows are made in delicate leaded rectangles of pastel blue, green and lemon glass with an image of the risen Christ and Mary Magdalene set in a lemon-shaped roundel. 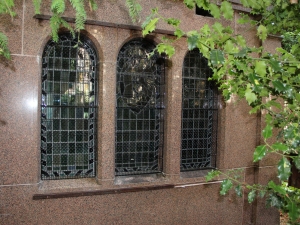 In this small but fine composition, the risen Christ, dressed in white inclines towards Mary Magdalene, who has fallen to her knees. Christ has raised his right hand in blessing, while Mary Magdalene, has her right hand stretched towards Christ. In the distance is Golgotha and the three crosses of the Crucifixion. This is the moment in St John’s Gospel where Jesus says Mary’s name, and in that instant she recognizes the risen Christ and reaches to touch him. 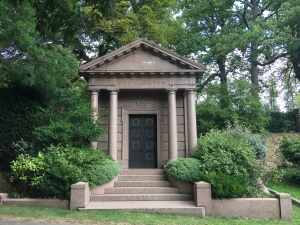 The Pocklington mausoleum at Highgate Cemetery built from Peterhead granite

The Pocklington mausoleum, while classical in appearance on the outside, has art deco features on the inside. The leaded light windows are in a shape typical of the era and a splendid if rarely seen mosaic decorates the floor.

AIANO made an initial visit to the cemetery to take measurements and templates of the windows before weaving the mesh and forming guards to the exact shape of the windows. In days gone by window guards were made of copper, which could lead to the discolouration of the stonework. Later galvanized steel was used. These days, although we are still occasionally asked for galvanized steel guards, the vast majority of window guards are made from stainless steel. Stainless steel, as well as being the longest-lasting solution, has the additional advantage of not marring precious stonework. 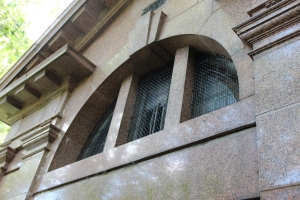 Both mausolea are made from red polished Peterhead granite from Aberdeenshire, and our AIANO senior engineer Steve had to be extra careful when installing the guards not to damage the beautiful stonework.

The principal difficulty was the fairly dense vegetation and limited space for manoeuvre in the space between the back of the mausolea, where the windows were located, and the wall separating the cemetery from Waterlow Park.

AIANO have been hand crafting high-quality, custom-made, stainless steel window guards to protect the precious windows of churches and other historic buildings for more than 150 years. 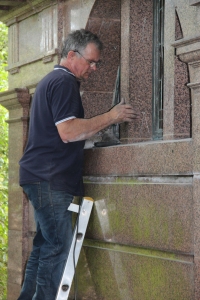 AIANO have unparalleled experience in all aspects and methods of making stainless steel window guards, whether they be made from weld mesh or traditional woven mesh.

Churches and historic buildings have widely varying window designs and shapes and our window guards are custom made for each individual window. We produce separate guards for each window light and tracery, as recommended by English Heritage.

To our knowledge, AIANO are the only company in England still making individually crafted hand-woven wire window guards for churches. When we fit the guards ourselves, we use our own method of invisible fixings that cannot be seen except on close examination. We use only non-ferrous fixings to ensure that beautiful stonework will not become marred and discoloured in future years.