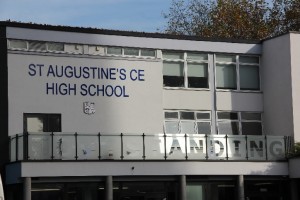 The new building at St Augustine’s School. The School was rated outstanding in its Ofsted inspection and the rather hard to read balcony inscription celebrates this fact. The school needed bespoke ball guards for the light fittings at its sports hall.

AIANO was invited to help design and manufacture bespoke ball guards to fit over heaters and light fittings in a sports hall at St. Augustine’s Church of England High School in North London. AIANO makes safety guards for a wide variety of different lights and heater fittings.

Building Schools for the Future (BSF)

In 2009 St. Augustine’s benefited from nearly £20 million investment under the Building Schools for the Future (BSF) initiative. Building Schools for the Future was an ambitious programme of capital investment in secondary schools, announced by Tony Blair in 2004. It was planned as the largest programme of investment in school building since Victorian times. The £55 billion scheme was intended not only to rebuild and refurbish every secondary school in the country but to create inspirational learning environments and facilitate the development of new teaching methods and approaches.

The programme became the subject of controversy as it failed to meet targets, and Tony Blair had to send a team to see why matters were progressing so slowly. Some said there was too much bureaucracy, others said the bureaucracy and detailed planning requirements ensured the best quality results. After the Coalition Government came to power in 2010, the Building Schools for the Future scheme was scrapped, although many schools that had already passed through the planning stages were allowed to complete their projects. 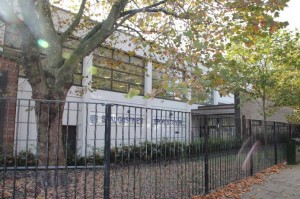 The programme was criticised for overspending, tragic delays, botched construction and needless bureaucracy. However, a report produced by the Partnership for Schools (the government quango set up to oversee the BSF programme) which became public as the result of a Freedom of Information request, reported that schools participating in the programme experienced improved performance in GCSEs at higher than the national average, and better attendance.

St. Augustine’s CE High School was originally founded in 1870 by Mother Emily Ayckbowm, who felt called to establish schools and orphanages around the country, and who also founded the Community of the Sisters of the Church. From its beginnings the school was connected with the nearby St Augustine’s Church. St Augustine’s Church is a magnificent Victorian Church. Consecrated in 1870, the church has roots in the Oxford Movement and is sometimes known as the Cathedral of North London. 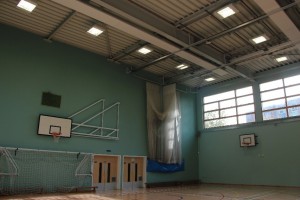 As a result of the BSF investment, St. Augustine’s school gained a new building and in addition, a new state of the art sports centre that is also used by the local community. Outside of school hours St Augustine’s Sports Centre is run and managed by Paddington Recreation Ground, in partnership with Westminster City Council, St Augustine’s CE High School and The London Borough of Brent. The school has a particularly strong reputation for sport and science, and boats Bradley Wiggins as one of its former pupils. 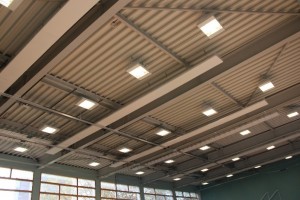 AIANO was invited by Westminster Maintenance Ltd who were responsible for remedial electrical works at the new school building to help design and manufacture ball guards for sports centre. The school is designated as a ‘sports for England’ school and as such needs to meet certain criteria, one of which is that there must be ball guards to prevent the balls getting stuck in the ceiling. Somehow this important requirement had been overlooked during the installation of the heaters and light fittings.

However in this case, the purpose of the guards was not to protect the heaters and light fittings from damage, but to prevent errant balls from getting trapped on top of these electrical appliances, approximately 10 meters above the ground, and so the guards needs to fixed to the top of the fittings rather than the underside.

There were six heaters in all, each heater being 12 metres long and 600mm wide, suspended from the ceiling. Westminster Maintenance and AIANO collaborated to develop a pyramid-shaped guard that would sit on top of the suspended heaters like a hat to prevent the ball getting trapped. AIANO manufactured a prototype guard that was discussed with and approved by Simon Cracknell, director of Westminster Maintenance before we went on to manufacture the six 12m guards. There was a tight deadline to be met because all the guards had to be manufactured and installed in time for the new facility to be used for summer activities during the school holidays. 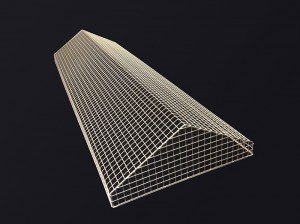 Each 12 metre guard was manufactured by AIANO in six separate sections to help facilitate installation. The heaters themselves are about 10 metres from the ground, suspended on chains and it was a major operation to get the guards into position, avoiding the trunking, cabling and other obstructions in the ceiling, and then fix them in place. AIANO designed the guards so that each piece could be easily lined up with the next section.

A scissor lift would be required to install the guards, and indeed the state of the art sprung floor had to be taken up in order to make the floor stable for the job.

In addition to the ball guards for the ceiling heaters another contractor active on site, Walter Miles Electrical Engineers, invited AIANO to manufacture bespoke ball guards of a similar design to be installed on thirty special light fittings in the same sports hall.

In each case the guard had to be manufactured to fit precisely over the top of each individual light fitting so that they could be secured in position.

AIANO radiator guards are the only wire guards to feature on the Dimplex website and are installed in schools across the whole country. But aside from our well known classic radiator guards, AIANO makes a wide range of bespoke guard products and designs guard solutions for the varying needs of Schools. See, for example, the special light guards we designed to be fixed on to pole-mounted floodlights on a sports field at the George Carey Church of England Primary School in East London. 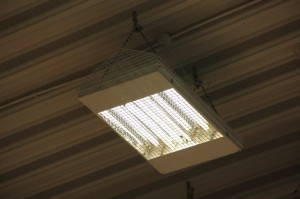 One of 30 light fittings fully covered with AIANO ball guards

Our senior design engineers have more than 70 years combined experience, and because the Aiano business has stayed in the family for all of its 150 plus years in business, the design knowledge and expertise has been transferred from generation to generation.

The guards we make are for health, safety and protection and a significant part of AIANO business is for schools, churches and hospitals, where children, elderly and the vulnerable should feel safe and protected. We always design new products with this in mind.

AIANO is an industry expert and authority, and very often AIANO is recommended in bid documents, in specifications and requirements by architects, construction companies or users because of our reputation for high quality, reliability, credibility and fast delivery.  Usually we develop new designs and establish new trends that other companies follow.  Please do not hesitate to contact us online or on T. 020 7987 1184 should you require any further information. 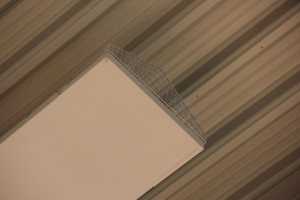