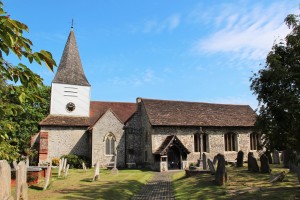 AIANO was recently commissioned to make and install new church window guards for St Nicolas’ Church at Great Bookham in Surrey. AIANO makes window guards for a variety of different windows and applications. St Nicolas’ is a distinctive grade I listed building dating back to Saxon times, and is mentioned in the Domesday Book. AIANO was invited by the church to make stainless steel window grilles to protect windows in the north aisle, the south aisle, the south chancel as well as the two seventeenth century windows above the west door. 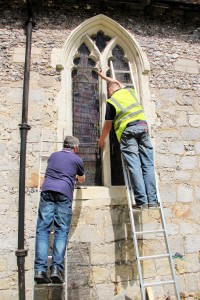 The church at Bookham has an ancient history and its origins can be traced back to Saxon times and the reintroduction of Christianity in the seventh century. The first church was almost certainly built of wood by the villagers themselves from local oak from the neighbouring common. It is thought that the wooden church was replaced by one made of flint, chalk and limestone in the first half of the eleventh century.Some remains discovered in the early twentieth century show that that the interior of the church was originally brightly painted. The window reveals had a chevron pattern and a wall design included the figure of an angel.

Over the centuries the church has, of course, been through a number of extensions and modifications, such as the arcading of the north wall in the twelfth century.

One of the most striking features of St Nicolas’ church is the tower, which was built during the fourteenth century with the help of oak trees from the common. It was faced with traditional Surrey weather-boarding and equipped with four bells during the fifteenth century, of which two remain. One was made in the seventeenth century, but the second is believed to be pre-Reformation. 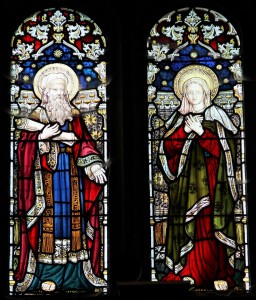 The church has some interesting stained glass, which has been well documented. Most of the extant stained glass work is Victorian. The east window, however, was purchased in the 1950s but is fifteenth century Flemish glass that was smuggled out of France during the French Revolution. There are also two windows over the west door in the tower which date from the seventeenth century.

AIANO engineers took templates and detailed measurements of the windows to be guarded. After weaving the wire mesh and fabricating the church window guards using methods that have changed little over the last 154 years, AIANO made a second visit to the church to fit the guards. AIANO engineers Steve and Adrian had to carefully remove the rusted and worn old church window guards before the new guards could be fitted. 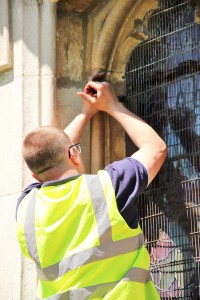 AIANO always takes great care to trace the exact form of the window so that each traditional church window guard makes a perfect fit. In this case, our engineers found much of the stonework quite crumbly, and we tried as much as possible to use existing fixing points for the windows rather than drilling new holes in the stone.

Some of the guards we removed were woven in what we call a ‘laced style’ because the cross weave is held in position with tying wire which has been threaded around each vertical wire in order to ‘stitch’ the cross wire in position. This was a common way of making window guards before the age of welding. The old guards were also made of mild steel which had been galvanised. Nowadays the vast majority of church window guards are made from stainless steel, but this is still a relatively new material. Before galvanising guards were often made of materials such as copper, which could lead to staining of the stone.

The new church window guards made by AIANO are from wire mesh which we weave ourselves at our workshop in East London. Here successive generations of AIANO wireworkers have been weaving mesh for over 150 years. We try to keep alive the traditional methods of making guards as much as possible because we believe that the more hand-crafted artisan ‘look’ of our woven mesh is more at harmony with the beautiful stone and stained glass work we are helping project. Thus each wire is ‘turned’ over the frame of the guard by hand rather than welded.

Among the windows AIANO guarded at Bookham church were two beautiful windows on the South Aisle depicting the Transfiguration and St George, St Michael and St Martin. Both windows comprise three lights with cinqfoil (five leaves) tops and the stained glass was made by Burlison & Grylls in 1889 and 1900, respectively. 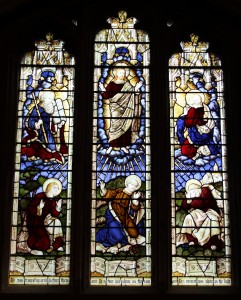 Burlison & Grylls was a highly respected and prolific Victorian stained glass studio. John Burlison and Thomas Grylls were encouraged to start their own studio in 1868 and were known for a more Northern European style that contrasted with the better known Morris studio, which was more influenced by the Italian Rennaissance at this time. Burlison & Grylls made stained glass from 1868 through until about 1945 when their premises were bombed during the War and they lost all their records.

The Aiano wireworks was started by Charles Aiano a little earlier in 1860, in Poplar High Street and Aianos’ too was bombed during the Second World War, losing its archive material and photographs. AIANO origins and history are recounted on our website. 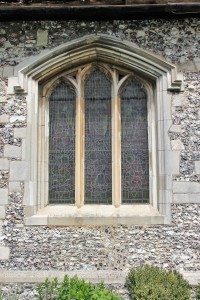 The Transfiguration has always been a central part of the Eastern Orthodox religion and is the frequent subject of icons, but has been traditionally less popular in the art of Western Christianity. At the same time, the Transfiguration is a subject that lends itself so well to interpretation in stained glass that it is perhaps here that it has been best presented. This makes the window at Bookham of particular interest.

The Transfiguration is the perfect subject for a three-light window with the six participants placed in balance across the three lights, three at the top and three below. According to the Gospels, Jesus took three of his disciples – John, Peter and James – up a mountain where he was transfigured before them and ‘His face shone like the sun, and his clothes became as white as the light’ (Matthew 17:2 NIV). The three awed disciples, depicted in the bottom half of the Bookham window, then witnessed Jesus talking with the Prophets Moses and Elijah, who are shown on each side of Christ in the upper level of the window. 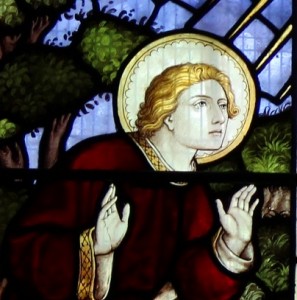 Burlison and Grylls were known for the attention they gave to faces and hands, and for their use of real-life people as models rather than more idealised figures, used by some other glass makers.

The other church windows guards by AIANO at St Nicolas’ include two delightful two-light windows with quatrefoil apex tracery on the south chancel, and the the three-light window on the north aisle that depicts an image from the Beatitudes with the inscription ‘Blessed are the pure in heart for they shall see God.’

AIANO has unparalleled expertise developed over more than 150 years in designing and making church window guards. AIANO make window guards from both traditional hand woven mesh and modern weld mesh. We make guards from mild steel which are then galvanised or from stainless steel, according to customer requirements. 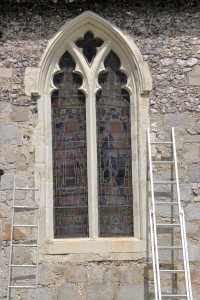 The finished Aiano window guards at St.Nicolas are hard to spot

We employ high skilled and experienced craftsmen – welders and wire workers – and we have particular expertise in designing guards to suit complex windows and situations, for example large windows with many traceries.

AIANO are particularly well known for our traditional hand woven mesh church window guards. To our knowledge we are the only company in the country making window guards using these traditional methods. Churches and historic buildings have widely varying window designs and shapes and our window guards are custom made for each individual window. We produce separate guards for each window light and tracery.

When we fit the guards ourselves, we use our own method of invisible fixings that cannot be seen except on close examination. We use only non-ferrous fixings to ensure that beautiful stonework will not become marred and discoloured in future years. We use only high quality European stainless and mild steel. 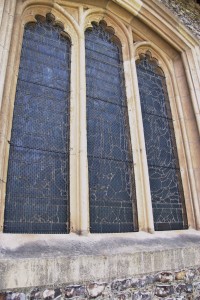 The window guards are usually polyester coated black after manufacture, according to the customer’s requirements, and when coated the guards are barely discernible.

We pay attention to detail at every stage in the process, taking accurate templates to ensure a perfect fit and adjusting the design of each guard to suit the particular requirements of its environment and situation. Please do not hesitate to contact us online or on T. 020 7987 1184 should you require any further information.