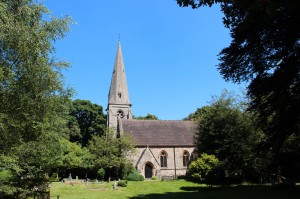 Holy Innocents Church is secreted away in the midst of Epping Forest near Loughton.  This late-Victorian church is officially in Essex, but being on the London side of the M25 orbital motorway, we can include it in our occasional series of articles on some of the capital’s hidden rural gems, where AIANO has had the fortune to supply traditional church window guards.

Holy Innocents Church was designed by Sir Arthur Blomfield in the Early English Gothic style and constructed in 1873. Located at the heart of Epping Forest, the church is accessible primarily by car or on foot for those walking in the forest. It retains some remarkable Victorian features including a Father Willis organ, purchased for £750 and, in the tower, thirteen hemispherical bells, cast in 1873 at the Whitechapel Foundry, long-time near neighbours to AIANO in London’s East end. It also has a marvellous timber hammer-beam roof.

The windows and traceries at Holy Innocents 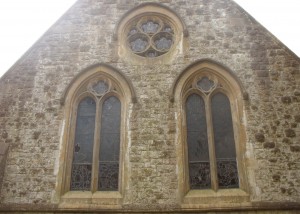 The windows to be guarded in the northern transept are in the Early English Gothic style.  More detailed tracery and subarcuation evolved gradually in the Middle Ages. At Holy Innocents the windows reflect the early development of English window tracery. Two separate windows with a gothic enclosing arch are each subdivided into two lights. The curves of the subsidiary lights do not follow the exact curve of the outer arch to allow more space above the lights which is filled by a single quatrefoil tracery with pierced sinkings.

Above the two gothic windows is a circular window containing three cinquefoil traceries each set in an enclosing circle and between them three small circle traceries.

All three windows have hoodmoulds and headstops, that is, a carved stone frame that follows the outer contours of the top arch from springline to springline ending with a small carved head.

The Stained Glass at Holy Innocents 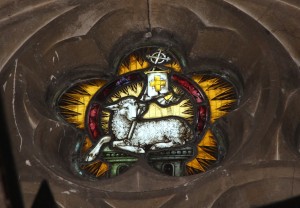 In keeping with the dedication of the church to the Holy Innocents, the stained glass of the north transept depicts images and stories associated with this theme. Images of lambs and sheep abound. There is a close connection between the suffering of innocents, i.e., the suffering of children and the suffering of Christ, the Lamb of God who is also the Good Shepherd. Thus the uppermost quatrefoil in the circular window depicts a lamb on a throne against a blazing sun, drawn from the Book of Revelations.

The four main lights each have two images. The upper larger image in each case occupies two-thirds of the window space and shows scenes of the Good Shepherd. The lower third contains images from the Old Testament and the Psalms, in particular Psalm 23. 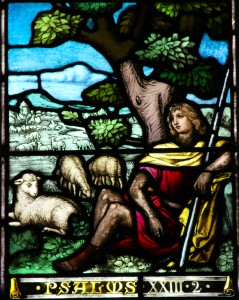 One of the lower stained glass images guarded by AIANO shows the shepherd and sheep of the 23rd Psalm. It recalls the forest surrounding the church and perhaps an earlier time when sheep might have wandered in the forest

Sometimes churches or contractors ask AIANO to make a single church window guard to fit the entire enclosing arch of a window and this can be a more economic guarding solution. However, it does mean that the window guard will be more noticeable because it will be fitted inside the outer rather than the inner reveal and will cover stone tracery-work.

The best solution therefore is to fashion separate window grilles for each individual light and tracery that follow the contours of the specific curves. This approach has a number of advantages; first, it is aesthetically more pleasing to the eye. The guard fits into each individual window reveal and does not mask beautiful stonework. In addition, by fitting so snugly within the reveal it will be stronger, longer lasting and less vulnerable to damage.

In echoing the pattern and contours of the stonework, the hand-woven church window guards contribute to the expression of meaning of the stained glass on the outside of the building. 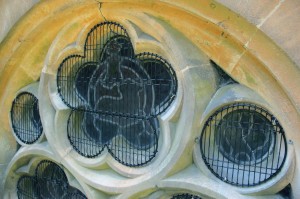 Detailed view of the top AIANO cinquefoil window guard and small circular sub-traceries. This guard protects the Lamb tracery window shown in the image above.

For example, the topmost tracery, as we saw above, shows the lamb enthroned against the sun. The rays of the sun naturally lend themselves to representation via the cinquefoil tracery form and that is conveyed on the outside of the church, where the glass cannot be seen, in the five lobes of the cinquefoil. The AIANO cinquefoil hand-woven church window guards, as can below, do not interfere with the communication of the meaning of the window. Had, as sometimes happens, the window been guarded with a simple circular guard covering the entire window and some of the stonework too, this would disrupt both the harmony of line intended by the architect and obscure the message of the stained glass. 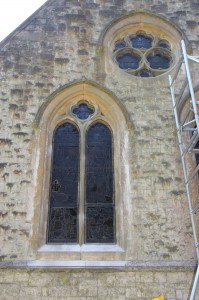 This approach requires a higher level of skill from the hand-woven church window guards specialist, not only in the actual making of the window guards, but also in taking the template to ensure that the finished guard matched the window curve as closely as possible. Not every workshop making hand-woven church window guards has the skill to make such complex tracery shapes (as we saw in our article about St Augustine Honor Oak). AIANO has more than 150 years’ continuous experience and knowhow in taking tracery templates and crafting guards that has been passed from generation to generation.

Holy Innocents Church was particularly keen that AIANO hand-woven church window guards be made for each individual light and tracery in order not to detract from the beauty of the stone and tracery work. The photo shows that from the ground, the finished guards are barely discernible and do not obscure the message and beauty of stone and glass work.