The church of St Peter’s in Woolwich is one of the oldest Catholic churches in London, and was the first church in London built by the figurehead of Victorian Gothic Revival, AWN Pugin in 1843.  The church is a Grade 2 listed building, and one of only three Pugin churches in London. Aiano was asked to design, make and install Bespoke window guards for two large windows on the Woolwich New Road façade. Working in conjunction with main contractor PAYE Stonework & Restoration, and HDMW Architects Ltd. A number of different guard designs were considered

The larger of the two windows was about 3.5m wide by nearly 6m tall. AIANO proposed a number of different guard designs including guards for individual lights and traceries, which is the approach recommended by English Heritage as being the strongest and least obtrusive. However the church had a particular problem with bird damage and the architects wanted the guards to be at the front of the reveal to prevent pigeon ingress.

This is an interesting and to some extent, counter-intuitive design. The usual approach is to set the guards inside the reveal. This means stonework is not obscured, the guards are secure and when fitted well are almost unnoticeable. The customer opted for a simplified schema of separate guards for lights and traceries, that is, instead of making an individual guard for every light and tracery, a larger guard was made that covered several lights and traceries.

However, while the layout was simplified in concept, in practice, the implementation was far from simple. These complex church window guards had to be fitted at the front of the reveal to prevent bird ingress. In order to secure the guards in the correct position and provide support for the large size of the guards pieces, special brackets and fixings had to be designed by our AIANO senior engineer. 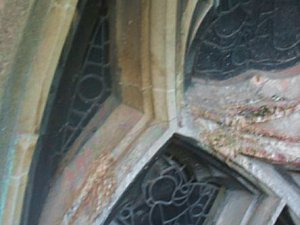 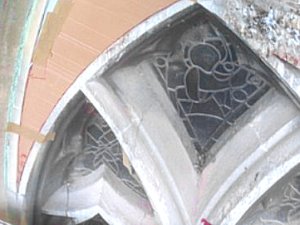 Making a template for the window guard

These complex church window guards were manufactured using AIANO hand woven mesh, which is made by our highly skilled wireworkers in our workshop in East London. To our knowledge, Aiano’s are the only craftsmen in the country able to make both hand woven and welded mesh window guards.

The site services were critical to the success of this project since these complex window guards required a complex installation process to positions the brackets and ensure the windows guards fitted perfectly and securely in place.  Aiano’s are probably the only company in the country capable of this kind of complex design and installation. First, it was important to take very accurate templates for the guards to ensure they would fit perfectly. The best way to make window guards as unnoticeable as possible is to ensure a perfect fit. Of course, the guards must also be well made and then well fitted. 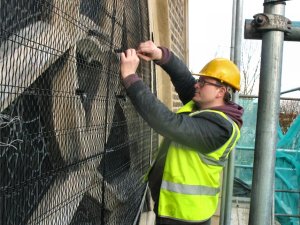 The second window, although considerable smaller than the first at about 2.1m wide and about 4.2m tall is still a large area to cover with a single expanse of wire guard, and once again the guard had to be supported with special brackets and pins. 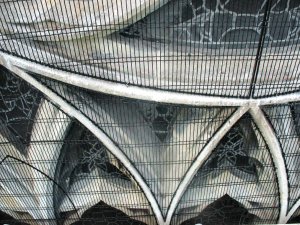 We do not make stained glass, we focus exclusively on wire mesh products. The production techniques have changed little in this time and our knowledge and expertise has been passed down through generations. We alone keep alive the knowledge of many traditional mesh weaving skills. At the same time, over the years we have embraced new materials and techniques, including the possibilities offered by stainless steel and welded mesh.

We have expertise in measuring, producing and fitting complex-shaped  window guards.A large number of churches and cathedrals around the country protect their treasured stained glass and leaded light windows using Aiano’s custom-made hand-crafted  window guards. For more information about AIANO traditional church window guards do not hesitate to contact us. We make guards to all sizes and requirements, and offer site services. Please call us on 020 7987 1184 or email us at sales@aianos.co.uk if you would like to discuss your requirements, or require further advice on AIANO guards.